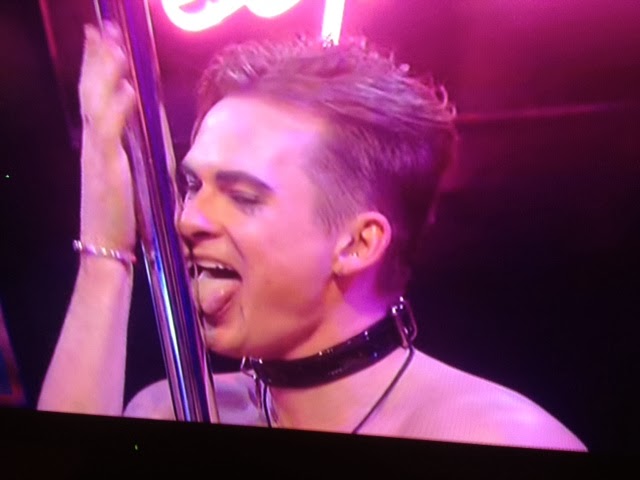 Well, yesterday sorted the Dappy-apologist, slut-shaming, women-haters from the forward-thinking, sex-positive everyone else who believe women can do what they like with their bodies. I will never understand in a million years why anyone - and it's particularly disgusting when it's women - care how many people another woman has slept with. In what way does it affect your life? Just mind your own business. We're so far behind culturally in terms sexuality in terms of Europe and America - we really are the frigid bitches of the Western world. No wonder other countries think we're uptight freaks and bad in bed.
All seems cheery this morning. I wonder how long that will last. I like Luisa's pyjamas/ onesie. It's the only attractive onesie, I've seen.
Lee: 'I'd love to get married.' Two days ago he said he didn't want a girlfriend.
Casey really needs to get over it now and just leave it with Lee. She knows who and what he is (fanny rat).
Jasmine: 'Lee is loud and rambunctious'. Yeah, like a puppy you regret buying. How does Casey keep her eyebrows so massive? Does she draw them on or are they tattooed?
Dappy seems veritably charming today. Lee's tattoos are so gross and cheap looking. His body's not even nice, either. Although my boyfriend likes his hair (?!)
Casey and Jim's bonding time. She's going to 'wait' to shag Lee? I think she'll be waiting a while. Although once Jasmine hovers off back to her crypt, she might have half a chance. Jim chatting up Casey, ha.
They are making Sam say she has feelings for Ollie! That's cruel! He's onto her! Sam is one of the housemates who has to be directed to become entertaining. That's a sign of a very poor housemate.
Haha, Jasmine starting on Casey for no reason! Mean Big Brother. This is imaginary drama. Casey's been looking for an excuse to shout at Jasmine.
Jim and Lionel  in their parkas pontificating. I don't mind there being old grumpies in the house, as long as they're funny.
Dappy's apology to Luisa did seem quite heartfelt. He could just be a TRUE GAMER. 'I've got kids, too.' Aw. Ha, I'm such a softie, I find it hard to hold a grudge. I guarantee I'll be off him again by the end of the show.
I don't know what Ollie sees in Sam! He should hook up with Casey. I bet Lee would fancy Casey again if someone else showed an interest in her.
LOL to those who didn't get to go to the sex party. Quite interesting choices for each party. OMG what is Lee wearing! Mixing a children's show with a sex party seems WRONG.
Dappy: 'If you're happy and you know it.' OMG Lionel just said 'suck my dick!'
Ugh this sex task is groo. I liked seeing Ollie letting his hair down, though. And so is Lionel! Sam did not look impressed with Jasmine's pole dancing.
The children's bit is creepier than the sex bit. OMG LEE RYAN'S POLE DANCING. It had to be seen to be believed. I took photos. I am scarred for life. He obviously DID spend a lot of time in the strip club. Ollie did not look impressed, and nor did Lionel or Sam. Luisa obviously wasn't that sexy as she didn't get much air time. Why didn't we see Ollie strip!!! Big Bruvver!
Lionel only did it to join in! Ha. Why is Lionel throwing his toys out of the pram? Lionel's moaning about what the girls did. What about what Lee did! What about Lionel going 'SUCK MY DICK'! I want to see the whole of that sex party uncut and decide for myself.
LOL to Jasmine calling Jim a grumpy old git. Jim and Lionel are so touchy! Talk about crabby.
Ha to Jim's disgust at Katy Perry. He don't want to hear her roar. He's got Russell Brand-itis. I wanted them to play another song just as they went to bed, something really annoying.
Is Jasmine naked? Are her and Luisa making out? I think Jim's gonna go hang himself. Why is Jasmine going out there? Leave the old man alone. Ha, he's pretending to be asleep. He's not mad. He's just about to throttle Jasmine. I like the way she laughed and lit a cigarette. She's quite cruel. I think she could crack him. I think she could push him over the edge.
Don't have nightmares.
Posted by lightupvirginmary at 22:34

I've just downloaded iStripper, and now I enjoy having the hottest virtual strippers on my desktop.