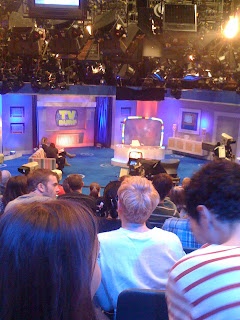 Last night I went to a recording of Harry Hill’s amazing TV Burp. I was a bit worried it would ‘ruin the magic’ but if anything, I was even more impressed with him.
We were kept waiting a fair old while; we started queuing about an hour before the doors opened at 5.45 and we didn’t get into the studio until 7.10. They did give us free beer in the foyer though- blergh. The BBC building is like some relic from the 60s, it’s so weird, it’s like an old school or something.
The set looked really good in ‘the flesh’ not disappointing at all. The warm-up man left a bit to be desired (as always)- it was end of the pier stuff with him laughing uproariously at his own jokes. Mind you, have you EVER seen a good warm up man at a TV recording? I have not.
Harry came out ‘in character’ and had some lols with the crowd. The show is filmed ‘as live’ but about 20 minutes longer so you watch all the clips and everything just like you would at home. It’s all set up so you can see really well- it’s the same studio where I saw Jonathan Ross and Ponderland, I think.
*Warning- some of this section might ruin Saturday night’s show for you*
It was a really funny show. I really liked the stuff about The Cube or ‘the rectangular cuboid’ (!) and Christine Bleakley even put in an appearance. My god, she’s like a giant! She looked ten foot tall. The chimp thing was hilarious and the African guy with the mad eyes was good. They had to reshoot the ‘FIGHT’ bit three times! There’s a really funny bit with Alan Sugar that they had to reshoot, too.
It was weird seeing clips of Eastenders that even we hadn’t seen yet. Eastenders are blatantly trying to get on Harry Hill at the moment- remember when they wouldn’t even give him clips from the show and he had to do court drawings?! How times have changed.
There were untold other funny things; his pronunciation of ‘Calypso’, the silly song he did about people he went to school with (which he did in one take- impressive when you see it), X Factor, and that ridiculous Eddie Stobart show. We didn’t get to see the knitted character in person but I have a knitted character at home, so that’s OK.
It was weird seeing what he does whilst the clips are on, he’s kind of gurning and twitching, he doesn’t come out of the zone for a minute.
One bit that was a bit weird was that the song at the end where he has a guest on was NOT live! It had already been filmed and they just showed it on a screen! So that didn’t feel right.
The strangest bit was at the end where they had to do some ‘redos’ as we used to call them at the plastic surgeons. They brought out the script for him and he sat there listening to headphones and marking it up for about 15 minutes. I thought it was weird he didn’t do that bit off-stage, as it didn’t feel right seeing him all serious like that after everything.
To make us laugh at bits we’d already laughed at before, he told new jokes just before he shot them, there was one about his Tamogotchi getting raped and another about his granddad being mad for heroin! Not the sort of thing you get at teatime on ITV. So it was nice to see those off the cuff bits- he sang a bit of Moz, too. He also joked about You’ve Been Framed and called it ‘money for old rope’. Quite!
We snuck off a tiny bit before the end because we were starving and it was all stuff we’d seen, so we were a bit naughty. Rebels!
All in all, it was a fantastic night, and I’ll be interested to see what they cut out and what they leave in. I’d definitely recommend going to TV shows as a free night out- you just have to queue up early, as I learnt long ago. I never did get to see Most Haunted Live (thankfully).
Posted by lightupvirginmary at 16:51

Actually, I believe I once saw Stephen K Amos as a warm-up man, many years ago. Was funny.

did you have someone at the side telling you when to clap and cheer, or is it a bit more natural than that? the only show i ever saw filmed live was Roland Rat when i was about 7.

asterisk, the last warm up man I saw was so sexist and offensive- it was horrible.
Al- no, there wasn't really much of that as everyone was laughing loads anyway. But I've been to ones like that before like at The Album Chart show where they make you cheer 75 times for Craig David or something (nb. that didn't happen- I would have refused!)

That should be fine- I think that's what we did. I might go again too! :)

What time did it finish as we are going in March but we have to get back to the Midlands?

I saw Harry Hill record one of his early TV shows at the ITV studios at Teddington (1990s). He did his own warm up: he seemed to be trying out new stand-up material; some of it I saw him use at a later date, some I did not - so I suppose it depended on how it went down with the audiences.