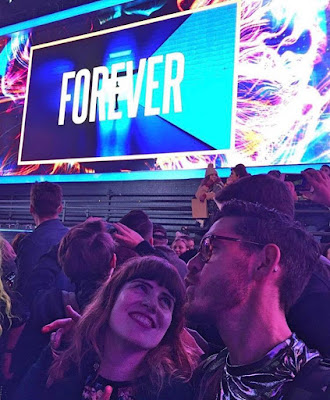 PS: Keep listening to BB on Blast! We'll cover US and Canada. Send in any bbuk finale feedback to bbonblastpod@gmail.com before Friday. Love you!
Posted by lightupvirginmary at 19:25 2 comments: 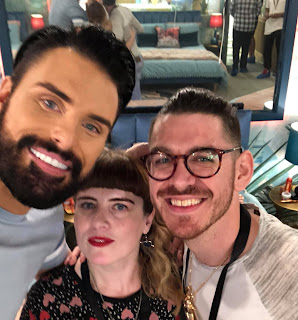 Task! Is this the first proper task? They have dressed them all up like Stepford wives and 50s husbands and the men have to go work in the factory. Looks like they've had a proper makeover. Hmm. Outside contact?!
The women are waiting on the men and cooking them breakfast.
BUT THE REAL TASK IS. The women have to work in the factory too and beat the men. They seem quite happy about it, even Ann!
I'm not really paying attention to this task. Do they girls have an advantage because they know they're in competition with the boys?
The task is OK to watch not very good to blog about. Everyone is raving about it but I'm like 'meh'. My standard is people hanging off a wall on BBUS. Courtney is given a cue card (I imagine) saying 'What do you think about Donald Trump's locker room talk?' Andrew's obviously been given another cue card saying he has to say 'allegedly' before he says anything about Harvey Weinstein. Sigh. 'Innocent until proven guilty!' Tell that to Jimmy Saville.
Ginuwine is saying women might be making up some of the claims. Courtney is there to set him straight: 'The statistic of people misreporting sex crimes is very small. That's blaming the victim.' Oh my God, I love her so much. She is one of the only people on Big Brother that I not only enjoy watching, but that I'd also love to be friends with. I feel like I'd learn such a lot, and also have a bloody great time. He/she HAS to win.
Ashley is apologising to India for something. I don't know what for. I blinked and missed it.
Amanda: 'India's playing the victim is a strategy.' India: 'Where did that come from?' Where indeed! Who grassed up India? I think she was talking to Dapper about playing up her role, wasn't she? Snitch!
All the boys came back into the house and the women pretended they cleaned it, but were thwarted by Shane/ Courtney's questions about extension cords and the length of the cord. He wanted to know ALL the details. Jess is not a very good liar. Thwarted!
Ashley talking about women messing with the milkman back in the day. Ashley: 'Just so you know, I don't cheat.' Ginuwine: 'I've got more than enough for you.' Yuck.
Maggie is trying to get the dirt: 'You two look very cosy.' Ashley: 'I hug everyone.' Bitch, please.
They are now recycling stuff. Topical. Ooglies! Wayne Sleep is channeling Leslie Jordan with those glasses. 'Get the fuck outta here!' I like Wayne Sleep though! He seems sweet.
Dapper: 'Do you have feelings for Ashley?' Ginuwine: *laughing* 'I don't even know her.' Nice. Dapper has a great way of bringing out the worst in the men. Also, I don't want to look at his bum crack.
The men are talking about shaving their pubes. Wayne is interested in doing it cos it makes your dick look bigger. Thanks for that image, Wayne. Men who shave their pubes are girls. I'm not a fan.
Shane L is talking about Stephen Gately's coming out story. Poor Steo. RIP.
Did I really just heard Andrew from the Apprentice use the term 'cis women'? I have officially seen it all. That is some futuristic shit. I think I have only ever read that online (oh no, we did discuss it in my office actually). Andrew is discussing vaginas with India. India chose hers from a book.
Malika says Jonny has come out of his shell. But Ashley knows what the British crowd are like, and we like the drama of India. Malika doesn't have a clue how this show works! She'll get a shock when someone gets booed to hell and then stays and the winner gets booed. That's how it works in Borehamwood. We keep you on your toes.
Andrew likes a bit of lip, a bit of labia on the vagina. Not good news for Courtney, as hers is made of masking tape.
The boys think Ashley and Ginuwine are going to kiss tonight. But they have to say it in such a laddy, horrible way.
Interesting that India said she likes Ashley and that Ashley 'is patient with her.' I wouldn't like to have a personality where people had to be patient with me.
India is regretting going on about gender too much. India is gaming now. I love it. India is in full game mode. 'Everyone is banking on me going out.. but maybe there's still time.' YES. India must stay. What is Jonny doing? Smiling and dribbling?
Ashley is perving on Ginuwine through the bedroom window and he's beckoning her into bed. But she didn't go. Their relationship is quite old skool Big Brother as well, it's very slow moving, but the difference is, I don't care what happens as I don't care about either of them. I don't hate them, I'm just blah on them. BLAH.
New BBonBlast coming tomorrow night! If you like the podcast SAVE INDIA. Cheers!
Posted by lightupvirginmary at 22:17 No comments:

Celebrity Big Brother 2018: You were attracted to a Dalek?

Celebrity Big Brother 2018: Who's the man with a plan?

Who's the man? Brandon Flowers, collecting his royalties. So will the show be royally butchered when the men go in? Let's see.
I like Emma's furry sequinned coat but not her crappy windswept hair.
Standard Big Brother twerking and slut dropping. Have they not even dabbed yet? So retro.
Amanda calling India 'he'. That's Ann, Rachel and Amanda who's done it now. Not acceptable.
Amanda was not very apologetic. Ann: 'An apology is always enough.' Who the fuck are YOU to say that! It's NOT for you to judge it. You're not transgender!
Eek, gone right off Amanda in two seconds flat. She did not sound sorry at all. Ann chipping in with her two pence worth, yuck.
Ah, Amanda is drunk. Fuck Rachel too, saying India's reaction was 'performative.' Fuck these old bitches. Bigots. Gross. Ann just stirs it up. Poisonous.
India having to tell them she's a real woman. They will never understand. They will never get it. Small minded. I can't believe how much hate India is getting on Twitter. I don't know why! I think she's good! I think she's in the right. Even my mum tweeted me that 'India is getting nasty.' How! She's no Phelan!
Sad piano/ guitar music. India hiding in the garden under a blankie. Imagine going through all that and having people just call you 'he' still. How undermined must you feel.
Side note: I like Amanda's orange coat.
Ooh then men are going in already!
John Barnes the footballer is first in. I have never minded him as far as footballers go. And I hate 99% of footballers. I like his crappy song.
Yuck, I hate these inside interviews! Annoying. Save it for the eviction. John is anti homophobia and racism and judges people based on their character. I hope so! Minorities should support each other.
John Barnes- the new Ziggy.
Next in is Courtney Act, a feminist vegan drag queen. I loved his description of himself. He looks great as a woman. I love his name too. I don't know anything about him but I know people are excited about him going in. He's Australian! Interesting.
Confusing hashtags - are we calling him Shane or Courtney! The difference is, it doesn't matter like it does with India.
OMG Courtney falling over. And no pants! Best entrance since Gary Busey. I don't care if it was fake, it was amazing. It did look like he tripped on his dress. No pants and covering up his junk. Oh my. I'm speechless. Rewound this at least five times. Emma was cracking up. Wish I'd been in the audience for that.
Next up Shane Lynch. 'I think the world is disgusting for the way they treat women.' Me too! You can open doors for men and women though, Shane. Shane has been watching! He knows the house dynamics. Can't we just call him Shane and Courtney Courtney? I can't deal with another Luke A/ Luke S situation.
Next in is Jonny Mitchell. 'Feminism has gone too far. - no point being a feminist then saying you don't want to split the bill.' Good point. He looks like Bo Baskoro, a singer I like, haaa. Nice for a villian to have a lisp. Good for the podcast, haaaa. He's gotta be from Essex! I do think he's not bad looking despite the hair.
Next in is Dapper Laughs who said women are 'gagging to be raped.' Oh, he's trying to be a reformed character. Emma: 'It's time to hear him out.' Fuck off! Oh he's had a baby girl, let's hope she never gets raped. Did he just make a joke about his dead dad fiddling his baby? Oh you've got a dead dad and you've had a baby. Fuck off!
So we have to call him Daniel now. Ha, and now he's bragging about being given loads of money! NICE. He even looks like a complete cunt. Jamie O Hara vibes!
Ooh John Barnes looked a bit uncomfortable when Dapper came in! Interesting. I would grill the fuck out of him! And he goes straight to Ann and talks to her. I can't believe there's no live feed tonight! Fail.
And we're back. Nice to see Dapper Laughs getting cheered by the crowd, isn't it?
Next in is Wayne Sleep. I don't know much about him but the older gay trope can be quite entertaining... as long as it's not Louis Spence. He's already friends with Amanda. I like the fact he's five foot two. So am I! He's dancing on the way in. I hope he's fun.
Who's drunk all the champagne! I'd be fuming.
Andrew from the Apprentice is cute. Looks a bit gay though. Feminism means women should spoon men. Yes, that's the cause we're fighting for. Look at his shoes with no socks and meggings though. And his friends in their coats. Shameful. He does seem quite friendly though.
Ok, I'm drunk now. Next in is Ginuwine. I do remember his song Pony now I just replayed it on YouTube. Does he know what 'pony' means in the UK? He looks a bit greasy. Sisquo! Fatman Scoop! I loved Fatman Scoop though. I think he's more Sisquo that Fatman Scoop. Racist! I just called Fatman Scoop 'Fatboy Scoop' on Twitter because I'm drunk. That's like the worst mash up ever. Right here! Right now!
So only the women can vote and the women have to assign roles for the men to do. Haaa! So the men have to crawl to them. Dapper Laughs for toilet cleaner!
Again, criminal there's no live feed now. Yes, I am still beating that drum. When we visited the house, they had channels for different rooms, so they COULD show it, if they wanted. But they don't. They burnt their own house down.
Posted by lightupvirginmary at 23:08 1 comment:

Celebrity Big Brother 2018: No umbrage will ever be taken