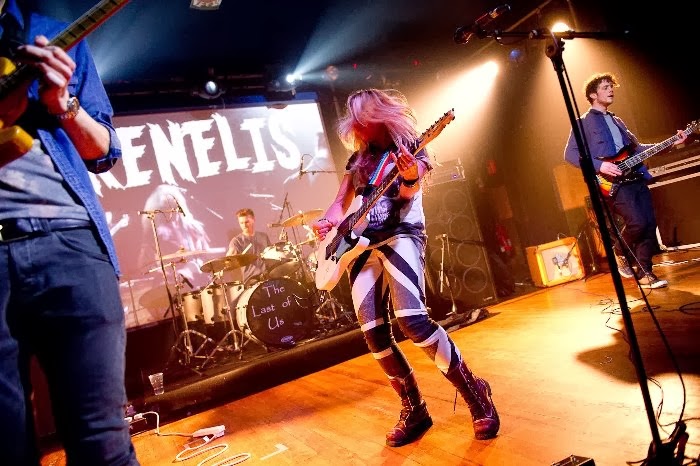 The last band I saw play at the Scala was Bright Eyes; so to see Mel and her gang standing on the same stage as one of my biggest heroes was a big deal. The Scala also holds other memories for us; a few wild, memorable club nights at Popstarz in our twenties meant that this felt like a homecoming gig of sorts.
The band opened with Moving to Brighton, which has a strong guitar part. I’d say Kenelis have two sides to them; a heavy, rock sound and a rocky/pop side. Personally, I like the heavy songs the most. I’ve always liked the screamy/ angsty ones and I like the acoustic ones too, but I think that's just because they remind me of old times!
It was great to see the band up on a screen in the venue, too. I like the Scala as a venue, and the sound was great. The last big venue I saw Kenelis in was the Indigo2 club at the O2 arena, and I think they really lend themselves to filling up these big venues with their big sound.
Next was GFY, which I’d say was more poppy, although it still has a rocky guitar and loads of energy. I think you can hear Mel’s accent come out much more when she sings now, which is always a good thing. I love hearing accents in songs – real accents, not put on ones!
Next up was Don’t Kill My Rock, which has a punky feel to it, with handclaps and ‘heys’ from the boys in the band. I really liked With Scars, which is where there were some technical difficulties, but I actually liked the more stripped down feel of it, as it is more of a ballad (or was that night!) Ballad is the wrong word; I don’t think Kenelis do ballads!
With my memory, I can’t remember which songs are very old or very new, but Holes feels to me like a classic Kenelis song (even if it isn’t), with strong lyrics and a catchy chorus.
The band finished with Prodigy Witch that has Metallica-esque guitars – I loved it. The song has a lot of different parts to it, stop-starty bits in the verses, screaming, slow bits and sing-song parts with backing vocals. It has a Paranoid Android sort of structure to it. I like it when you don’t know quite where you are with a song. It just has a bit of everything – to me it’s perfect Kenelis because it encapsulates all of their strengths; it’s got heart but it’s also got just proper headbanging parts. I like the ‘witch!’ screaming at the end, too. I always like screaming on songs!
I don’t think the crowd were in the least bit bothered by any technical difficulties. I noticed how the venue filled up as the set went on, and when it finished, I felt like we’d just been getting started. Hopefully this gig will give Kenelis a push onto the next level of stardom; they have paid their dues and they deserve to be big. We’re sadly lacking in strong front-women in rock at the moment, and Mel, in her grey and black union jack jeans, is more than ready to step up.
Posted by lightupvirginmary at 11:57 No comments: