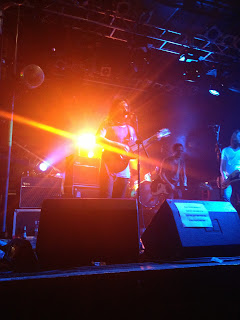 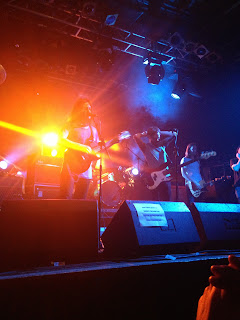 Probably the best thing about Desa is they don’t have any slow songs, every single one is a screamer. So it was a nice contrast to the acoustic gig of the week before. Also, as they only have one album, you knew every song. It’s quite cool to go to a gig where you’ve been listening to that one album for 10 years, never expecting to hear it live, because the band had disbanded. And then when they get back together it’s not a tired old money-making racket like Pulp, for example.
At one point Conor  played the song $$$$ and limp-wristedly threw some money in the air, that never even got as far as the end of the stage, and at the end of the gig, the bouncer stole it! What a git. It was £35 as well because I could see it sitting there (hey big spender) – that would have covered the extra cost of my ticket! Conor also said he'd been shopping on Camden Market; wish I'd gone there that day!
All of the songs were good (there was a Clash cover which I wasn’t fussed on, but it beats Moon Over Kentucky or whatever crap Morrissey normally tries to inflict). But my favourite has to be Man and Wife, The Latter (Damanged Goods). I must have played that song in my car over a thousand times. It’s just pop perfection. So to hear them play it seemed slightly unreal. The crowd was literally bouncing all over the place, I haven’t been to a gig with energy like that in years. And thank fuck I was on the barrier, or I would have had to run for cover.
It was so nice just to be that close to Conor and not to have to worry about anyone else, but just to do exactly what I wanted. I would definitely recommend going to a gig on your own, it’s fun.The crowd was small as well; there wasn't even a queue. I thought Conor fans would have turned out in droves.
I really pray that Desa put out a new album now, Conor is at his best when he’s screaming or heartbroken, and about as far away from a country guitar as possible. He promised to come back sooner, so don't let us down!
Posted by lightupvirginmary at 21:54 No comments: