Derren Brown: An Evening of Wonders 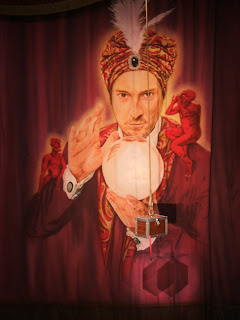 So for my birthday on Friday night (30 May) for my pressie I was taken to see Derren Brown at the Garrick Theatre. Yes I am obsessed with Derren! I'll be glad to be on his side when he's running the show, believe me.
I went to see his last show as well, back when he was straight. I guess that one was more spectacular in a way, what with him stopping himself breathing and stuff, but this one was just as good, really, in a different way.
One thing I noticed that I didn't notice last time was the massive amounts of nodding Derren was doing, he was like a little nodding dog. He does nod a bit on the TV but this was ridiculous. It's annoying that he's just putting stuff in your head and you don't know why. Annoying, but good.
There seemed to be a hot and cold theme to the night, Derren kept dropping 'warm' and 'cold' into the conversation and sniffing and saying he was ill (yeah, right). Then in the interval it got massively boiling and freezing again. The weird part of all of this was it was never explained, so I can only presume he was just fucking with us. Naughty Derren. I liked it at the end of the show last time I saw him where he showed you how he did some of his tricks, but he didn't give us his secrets this time. Aw.
I won't ruin the show too much, but it was good fun and mind-bending as usual. There was one bit where Derren basically appeared in a monkey suit from nowhere- does he have a twin? I was looking at him on the other side of the stage one second before. The bit where he rang this guys friend was highly amusing (mainly when he made the guy ask his friend what he was wearing and he replied 'trousers, why, what are you wearing?' The trick he did with him was pretty good.
The only bit I didn't like that much was the table tipping because it dragged a bit, but it was impressive when it floated (allegedly!)
The mind reading at the end was particularly ace, I liked the fact that he knew some guy had called him a wanker just from looking at the initials on the envelope. How did he guess one woman had a fear of dressing gowns? How?! One things for sure, psychics are liars. One other thing is for sure, I want to learn cold reading! It's so impressive. Derren is God. He might as well be.
How did Derren have what was going to happen in the show (and what people were wearing) written in a locked box at the top of the stage? The answer is, he couldn't, of course. But he did.
And for that, I salute him. Why are all my idols gay?
Posted by lightupvirginmary at 21:16

he just hypnotised you into writing that.

dammit! I went on Saturday and then also, a boy in the audience supposedly wrote "cock" on a card. Derren said he thought it would say something like wanker...

Was the person in the audience whose dress he predicted (in the wooden box) wearing a distinctive bright pink dress with white spots on!

No, she had jeans, silver shoes and a blonde bob. Tell me your girl didn't have a blonde bob or I will weep!