Book review: What We Were Thinking Just Before The End 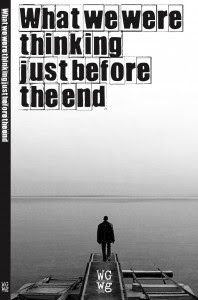 Is is it fair to review a book that I'm in? Probably not, but it's my blog and you know, it's more highbrow that Big Brother.
This is the second book published by the Willesden Green Writer's Group (which I'm the chair of; just don't ask what THAT involves), the first of which won the Raymond Williams prize of five grand. Not bad, hey?
And the good news is, this book is even better. No, you won't remember the title, yes, you will get bored typing it out again and again if you're me, and you might even have not liked it very much in the first place, but majority rules, democracy is king and all that rubbish (for now; it'll be a different story when it's my own novel, obv). Actually, the cover and the title actually work very well, and the book looks bloody marvellous, and was the result of many hours of hard work, so a lot of respect to all those who put the work in, and respect to all the writers within who just bathed in the glory.
But what's in this bloody book? Well there's loads of totally different stuff, which reflects the many personalities (and egos) at WGWG. There's some damn good writers too, and I'm really proud to be a part of the group.
There's some really funny stuff in there; a story about a Scrabble game gone wrong by Clare Sandling, an amazing story called Piano Smashing Blues by the brilliant writer Steve Moran, and Stephan by Brian Curran which has a brilliant twist at the end. There's some moody haikus from Lee Webber, tales from McDonalds (a subject close to my own heart) by Jeff Achampong, and a really evocative snapshot of Pakistan from Bilal Ghafoor. I can't mention absolutely everything in it or I'd be here all day (so don't shoot me, the rest of you) but the standard is really high. Oh, and there's an extract from a novel called First Aid Kit Girl by Lynsey Rose, about a misanthropic self-harmer (it's funny, honest!) as well as four of her poems (all genius, obviously, even the cucumber one).
Anyway, the group will be doing various readings in and around London over the summer and I'm involved in one on Monday night (which I think we're just cameoing at) at the Pulp Net short story cafe which is at Costa Coffee (just as good as Wembley).
And you can buy What We Were Thinking Just Before The End just here. It's honestly really good, I wouldn't try and plug it if it wasn't. I don't get a penny from it either, it all goes back into the group!
Thanks for humouring me. I'll remember you if I ever get my own theme park.
Posted by lightupvirginmary at 20:19

i doff my pretentious cap to you. your poems are great. see you monday. Lee

Congratulations on the book Mary. It does look great. Don't know why you haven't plugged it more.

So when's the novel out?

when someone wants to publish it! I'm sending it out as we speak.. :-)

A Jaye, your big brother blogging is INTENSE! I tried to comment but was confused by the system.

I got my copy of this this morning, going to start reading it tonight.
:D