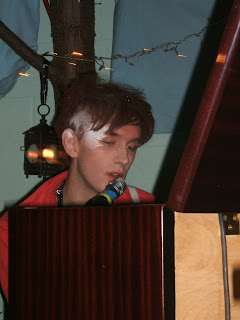 I had an unexpected delight last night. Came home from work feeling tired and the highlight of my evening was going to be a trip to Morrisons (woo! bring it) Instead got a text from my (amazing) friend J-of-the-V who told me that Patrick Wolf was doing a secret gig for his 24th birthday in The Abbey, a pub in Kentish Town. You just had to pay £2 on the door. We only live up the road from there so we got changed super quick and dashed down there. Whenever you hear me complaining about London, just remind me that the music in London is second to none, and I should be grateful to live here, because it's true. I couldn't exactly pop out to Patrick's birthday party in Northampton town, could I?
It was a really nice pub actually, and quite busy with assorted freaks and kids. Everyone looked very dressed up except me, who hadn't had time to put my make up on! Met up with my friend and his lovely boyfriend (a big Courtney fan too! Always good) and another friend of theirs. We also ended up bumping into a VERY old friend of mine, whom via pictorial evidence Patrick Wolf's messageboard a couple of months ago I discovered she was friends with him! So it was all very strange and cool.
The gig took place in the beer garden of the pub which had been decked out really nicely with fairy lights and and tealights. It had a real enchanted garden feel too it, with loads of seating and flowers and a really warm friendly atmosphere. We got a really good spot right at the front (I'm so jammy lately with gigs!) Patrick was supported by his friend Bishi who we had seen support him at The Astoria also. She is gorgeous with a really lovely singing voice and one of her songs in particular was really excellent, so I think I'll check out her album.
Patrick's set was a real treat, very intimate and good fun, he was chatting with the audience and fluffing the words and laughing and he just seemed very happy and relaxed. People were talking to him and he was replying with good grace. He has the most gorgeous smile and it was really wonderful to see him in such a beautiful setting. He opened with Get Lost, and played (from what I can remember in no particular order) Augustine, The Stars, Pigeon Song, The Stars, Wolf Song, The Magic Position and Magpie with Bishi, which works really well live I think.
At one point he was asking what songs people wanted playing and my boyfriend said 'Why don't you play that Prince song you played on the Charlotte Church show?' Which was When Doves Cry. And he started singing it and doing a rather sexy little dance in our direction (I think it was aimed more at my boyfriend than me- sob!) and said he'd wanted to dress up as a dove on the show but he thought it was a bit controversial and that it was hard making Charlotte Church sing 'in a sexual manner'! How exciting.
I think Patrick was hanging around after chatting to people but I wouldn't have known what to say to him and we were STARVING so we buggered off. Spur of the moment things really are the best, and it was amazing to see one of my favourite artists for £2 as well as to catch up with my old buddies. June has been an amazingly jammy month for music. I've absolutely loved it. Happy birthday Patrick, I hope you enjoyed it as much as we did.
Posted by lightupvirginmary at 13:05

Hahaha, you wrote it! Brilliant. Me being me I was dozing off afterwards but apparently Patrick was walking around chatting to everybody, the boy proudly got a polaroid snap with him.

You were so lucky to be there! I can't wait to see Patrick in the FIB (Spanish festival). Just one thing that maybe you know it or it isn't of your interest. I saw that you like the film 'Vanilla Sky'. This is a version of the Spanish film 'Abre los ojos' (Open your eyes)by Alejandro Amenabar. Try to watch it. I do prefer it than the American version with Tom Cruise.

Cheers!
Nurie
www.myspace.com/nurie (yes, I found your blog in myspaceheheh)

Cheers Nurie I'll check that out.
John- I want to see your pics! :-)

Damn not living in London.

ooh looking forward to seeing his wolfness at Latitude tho!