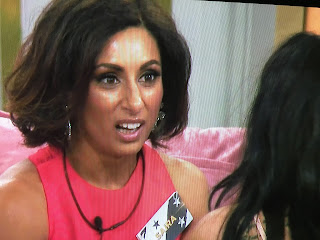 I still can't get my head around 'internet sensation' Frankie Grande being in the Big Brother UK house. I admit, it's freaking me the fuck out. I liked Saira saying he's got camel toe and him saying it's called 'moose knuckle.' Haaaa.
I loved Saira saying 'What you doing now?' to Fatboy and him going 'This!' Too funny.
Wow, Renee's arse. What can you say? It's like two bull mastiffs being drowned in a bin bag in the canal.
Ha to Marnie saying 'you're like my twin' to Renee. Evil twin! Apparently James Whale is OK but that remains to be seen.
Aubrey is the biggest shrug for me so far. WHO IS SHE? Shit, I realised I never saw the live feed last night cos my stupid TV didn't tape it. I need to rectify that situation.
Ha to Frankie saying this Bear freak is hot. He's really not. This TOWIE one, Lewis, may be worse. Couldn't they have put a sexy guy in there for us ladies?
Biggins name dropping Liza Minelli, ha. I prefer Lasagne Minelli.
What does Biggins know about what women do and don't like in bed! I bet I give a better blowjob that that old fart. Fuck him. Frankie going 'that's true' that men give better blowjobs than women. Biggins and Frankie have never slept with a girl! I wouldn't comment on gay sex and what goes on, so why do they disparage women like that? Do 'a lot of women' not give blowjobs? Maybe Saira Khan.
Ha to Marnie flirting with Grant Bovey and him refering to himself in the third person. I liked it when he said he was 72 and she basically believed him. Grant Bovey looks like Darren Day left in vinegar for a season or two.
James deflecting racism by saying he's the judge of the British curry awards. Saira is like the new Perez, quizzing everyone.
Renee talking about 'Middle Easterns getting guns' - eek. James: 'Every religion believes in an imaginary friend.' True! I think he might have some interesting things to say but he's gonna rub people up the wrong way so badly, he's never going to get to say them.
Frankie straight in with the single bed, LOL. How to make friends and influence people. CLAIMED! Then agreeing to share with Lewis, haha. Frankie is probably shocked a straight guy would share a bed with him. He's not au fait with the mantub and British culture of being a bit queer, basically.
Saira is missing her kids. IT'S THE FIRST NIGHT! (Oh hang on, I didn't spot that she was gameplanning here)
'DBAC: don't be a cunt will get you through life.' says one of the biggest cunts in the house, ie. Heavy D. He's no Gary Busey, is he?
Frankie is plotting, scheming and strategising already. Yes! Frankie needs to create a new Bomb Squad alliance against Biggins.
James wants a 'Loose Men' show. Can't we just scrap Loose Women if we're trying to equal things up? Let's not give the meninists a platform. I have enough of those cunts on Twitter.
Ugh please no Marnie/ Lewis showmance. 'I'll be in the diary room with the girls for 3 and a half minutes.' Charming!
OMG James: 'She thinks I'm a racist.' to Saira. Haha. So much has happened in the past 15 minutes. I can't keep up. Saira: 'If you're a racist, that's absolutely fine.' What?!
Biggins is having to nomate someone by kissing them on the lips, and the other housemates are in on it. I kinda like Biggins' dressing gown. Should they be making him kiss people on the lips, especially a 'big sloppy kiss'? Sexual harrassment (just ask Frank Eudy)!
Frankie and Katie singing Spice Girls to get nommed was amazing! Great strategy. Aubrey shouldn't be asking Biggins directly for a kiss, that's shady. I think Biggins is onto it. He watches the show and probably heard them scream when he was in the DR.
I love Marnie asking Saira if she was going to have sex and asking her if she brought a vibrator in. Saira: 'I'm married, I don't do sex.' What did Marnie say to make James walk off? Something about ice cream!
OMG to Marnie asking Saira if she's ever masturbated. Saira looked disgusted! There's a bit of a social and cultural clash there. I think Marnie was drunk. though.
OMG so much is happening I can't keep up. This is magic!
Ooh Saira's face when Biggins nommed her! But I think he nommed her because she was upset about her kids, so it's her own fault (I only realised she did it for strategy later).
Lewis in his Y-fronts in the pool. Yuck. But not as yuck as Heavy D.
Ah so Saira was faking it about her kids! True gamer. I have new-found respect for her now. I should have twigged that sooner. Haha, Bear and Heavy D are annoyed at her playing the game. LOVE IT!
I only just noticed Bear's neck tattoo that said 'be the best' and then Saira told him to 'be the best.' She's literally using his neck as a cue card.
Bear to Renee: 'Do you smoke?' Her: 'Pot?' LOL. Now that's a Big Brother I'd like to see. They are still awake at 5am! You can hear the birds tweeting.
OMG that episode went SO FAST! It might be due to the half bottle of wine I drank? Not too sure. MUCH improved on last night, I can see fights and controversy coming from ALL ANGLES. Bring it!
Posted by lightupvirginmary at 22:20

Friday's show seemed to have longer scenes for a long time . I will need to watch it again as I wasn't concentrating much as was trying to get my I phone to do some back up or something .

camel hump arse has just one spoon of cawfee in her cup,like momma yoos too make. you you hearin me you fuckin rat bitch?

When's the next BB US POD coming out? Steve, Austin TX

Hoping it turns out to be a good one !!!