Celebrity Big Brother 2017: All shook up 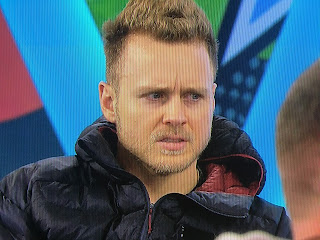 Hi! Have we got going yet? I haven't, but I'm still grateful for the lack of TOWIEs and Geordie Shores. If Calum Best and Coleen Nolan are the biggest duds, at least they're wallpaper and won't be pissing and shitting all over my favourite programme. At least, I hope not.
Ray J is being a 'sleeping on the couch' martyr. Prob doesn't want to share a bed with 'a gay boy.'
Angie pretending she's not a true gamer. Spencer knows!
Ray J has designs on being a diary room warrior. He can't share a bed because he's married. Especially not with Nicola McClean. Don't blame him.
Brandon Block looks like he's wearing comedy teeth and glasses. Angie thinks she's Queen Bee already. She knows she's untouchable with double the vote. She's a lot more interesting than Calum, though. Mind you, so's the back of a shampoo bottle.
Not sure about Bianca's S&M dinosaur look. On launch night, I can overlook it, but it's not daytime wear. Busting out the 'escape goat' as well. That shit is older than I am.
Coleen wants to be a house that gets along by quietly bitching about people behind their backs.
Spencer is fingering Angie for her gameplanning. 'Calum was bred for this.' Hopefully he'll suffer the same fate as Paulie from BB18 who was also 'bred for this.' Heidi: 'It's good to get along with people.' Don't lie!
Calum: 'It's brilliant we're doing it together' to his mum. Is he trying to convince himself or her? He's had to recalibrate his gameplan from being fanny rat to gentleman.
I like Ray J's shredded white jacket. Has Nicola McClean had her mitts on it? He looks like the Michelin Man.
Ray J is spilling the boring beans about Kim Kardashian. You've never crossed paths with Kim since cos she probably has good security. Oh, hang on.
The all stars have to decide which of the new stars are least entertaining. Zzzzzz.
Calum's mean little side parting is driving me mad. It's like someone has Pritt-Sticked some coconut fur on an onion. Did he pay money for that hair? Robbed.
Brandon Block does not look impressed with Angie's Elvis kiss and tell. Nor does Ray J. Hold on, she didn't even kiss him! 'Do you even kiss, mate?' (Deepcut Big Brother Bile Spencer vs Toadfish reference there).
Angie: 'No one knows the real Spencer. You wouldn't know if you were having a sincere conversation with him.' Good point.
Bianca has just kissed Calum! I thought they'd gone out after Love Island back in the day.
James Jordan seems annoyed by Ray J being a bit sleepy. He's probably tired cos he had to sleep on the couch to avoid catching 'the gay'.
Ray J spent 30K on a birthday party for his dog. James Jordan is trying to needle him. Twat.
Heidi's hair is looking somewhat orange already. Get the girl a toner. Ha, Spencer wants to edit out Angie. Sweet. Calum refused to do it and chose Brandon! Fuck that. Brandon is annoyed about it; don't blame him! Where's the democracy?
Even thicko Calum has worked out he has the numbers over Speidi. But Spiedi will have the backing of the IGP (idiot general public).
Stacy was 'shook' when Ray J walked in. SHAKEN.
Spencer regaling Angie with tales of his popular social media: ie. showing her who's boss. Angie is unimpressed at Spencer's ability to eat 40 tacos. Apparently said video has only 2,000 views on youtube. I have blogs with higher numbers. Admittedly, only one a decade.
Nicola McClean playing the 'as a mother' card hard. Yawn. Go home if you can't hack it.
Stacy telling Coleen about the Whitney Houston files. I'm bored of this storyline already. Run Stacy a bath.
I'm team Jasmine all the way against the boot-faced Nicola. Boo hooing in the DR. Don't milk it.
Jamie is after Jasmine, but Spencer is standing in his way. Was it Jasmine or Casey who had 'taps on' time with Lee 'fanny rat' Ryan? I feel like it was Casey, but he fiddled with Jasmine in a UFO (fact check that).
Breast implant chat, classic bantz. Zzz.
Jasmine's 'type' isn't a 'newly divorced guy with three kids.' Me either.
I like Spencer's Coleen impression, ha. They are all scrambling because of him! They can't hack it.
I like Jasmine the best out of the girls so far, she wants to play Spencer at his own game, and if she beefs with Nicola, even better. If she does get off with the midget footballer, I will lose respect for her, though.
Jedward tomorrow? Come on, you know it makes sense, or whatever Lidl's catchprase is.
Posted by lightupvirginmary at 22:08