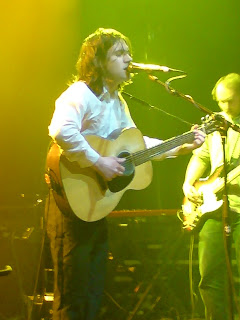 And so the day finally came. We left early, in the hope we'd get near the front and got in the queue about ten past six. We were slightly alarmed about the number of children in the queue- do i like kids music? Boo. I was also deeply offended when someone behind me said 'Digital Urn, Digital Ash was a rubbish album'. 1. It's not called that. 2. I'll go out on a limb and say it's my favourite album of all time. We seem to be in the minority in loving the rocky/ screamy stuff and not the straw-chewing stuff. Conor is only our age!!! He can still push himself artistically. There's 40 years for him to turn into Johnny Cash.
Did my usual thing of no drinks, so I didn't need a wee as I have the weakest bladder on earth. We got right near the front, one from the front again, standing on the metal barrier, like at the Killers. Perfect view. Koko can be a bit crappy when you can't see well. And you have to watch out for the gig-slugs who push in at the last minute but we were pretty well-defended.
The support band were quite pleasant: scottish Belle-and-Sebastian lite that didn't offend as much as the real B&S (hmm, appropriate initials). My nerves weren't jangling like normal when I'm waiting to see a band that I really, really love. And Bright Eyes ARE my favourite band.
I've seen Bright Eyes twice before and I knew they weren't going to do a greatest hits set. When I saw them at Shepherds Bush a few years ago they only played one song I knew and Conor didn't look up the entire time. Also, due to the new country direction (blah) I knew we weren't going to get A Line Allows Progress... more's the pity!
Still: it was very exciting. They came onto 'I Must Belong Somewhere' and Conor was hiding behind his new long hair. He looked absolutely tiny, not just short but really slight. I'd never seen him this close before. They played 'Cartoon Blues' second which was really good, and he got a bit sweaty so you could actually see his face/ expression etc.
The songs that went down best with the crowd were, unsuprisingly, 'We are Nowhere...' and 'Old Soul Song'. Conor DEFINITELY looked at me during 'We are Nowhere' haha so that was exciting, of course. 'Old Soul Song' was the highlight for me though, proper goosebump time. Its in a different league to most songs in existence. Of the new stuff they played I hadn't heard of I hated one song and loved the other, which sounds about right, really. 'Four Winds' and 'Soul Singer' don't set my world on fire on record but were good live.
Conor seemed on good form, making jokes (clowns/ Roger Rabbit), jumping on the drum kit and manically playing/ hitting his guitar. I love it when he really lets go vocally and screams and there was a bit of that
The encore was excellent, I loved the rocked-up version of 'June on the West Coast' especially as I've been listening to the really mellow version they played at Bonnaroo.
Ultimately it was a great gig, and we had a perfect view but I would have loved about ten more songs. Like Morrissey Conor plays what he wants, not what we want.
I guess it's too much to ask for him to play 'A Poetic Retelling of an Unfortunate Seduction'. But I can fantasise!
I can't wait to see them again... dare I dream of Glastonbury?
(and yes we took that pic)

I was there too, and I thought it was good, but not great.

I half-expected that would be the case, though, because:
a) I know when Conor promotes a new album, he rarely delves into his earlier repertoire (which made June on the West Coast an extra sweet, sweet treat);
b) he has been moving slowly but inexorably towards country. My theory is that now he lives in NY, he feels the tug of his Nebraskan roots...

While I don't think that Digital Ash in a Digital Urn is the best album ever (or Bright Eyes' best album, even -- for me that's Letting Off the Happiness), I think it's so much better than I'm Wide Awake, It's Morning. I can't remember the last time I listened to Wide Awake in its entirety.

And that makes me cautious about Cassadaga...

I feel much the same. I don't get the whole country thing: as a person living in England it means nothing to me. I don't mind a bit of folk, something a bit mellow, but my favourite BE songs are things like A Line Allows Progress, No Lies, Just Love, the angry ones, basically. The ones with really meaningful lyrics that I can relate to.
I'm hoping the new album will be a bit of a mixture. But as Morrissey once sang, my only mistake is I'm hoping...
Whatever happens, they are still one of the most important bands in my life, and always will be.