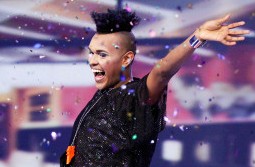 Now that the shock of the frankly shambolic ending is over and I've had a couple of days to digest the sheer ridiculous of it all, I thought I'd wrap up Big Brother Canada for once and for all this season.
For those who don't watch it, the winner is decided by the last 7 housemates putting a keycard with the winner's name on in a slot. Doesn't sound too hard, right? Well, one housemate was too busy showing off to check which keycard she picked up and voted for the wrong person. Her single vote meant that the one person I wanted to win, and the one person who she'd been campaigning to win all season, came second. Meanwhile, an inscrutable (and dare I say it) boring person - Jillian - shamelessly took the hundred Canadian dollars, a car and 25K shopping voucher; whereas Gary (pictured above) the vibrant, funny, underdog, fighter - and let's be honest, star of the show - was left with twenty thousand dollars. I don't know how much twenty thousand Canadian dollars is, but it's not enough to make up for this almighty disaster.
It was car crash TV: probably the biggest fuck up I can remember since Terry Wogan announced the wrong winner in the Eurovision pre-rounds, and that's wasn't exactly something a lot of people remember. So how could this have happened? From what I've heard/read, the producers did check the keys, and knew full well that Topaz had voted for the wrong person, but kept the votes the same for 'dramatic effect.' Well I hope they're pleased with themselves, as the 'dramatic effect' it had was showing Arisa Cox can present about as well in a crisis and she can choose outfits that don't look like they're out of the lost property box each week. She was so far out of her depth that she'd probably reached the coastline of America. As Topaz begged and pleaded with her to change her vote, Arisa stood with her back to the camera (dur), repeating, 'I don't know what to do.' What they should have done is dragged Topaz off the stage and given her a slap. I can understand that 'all votes are final', but it made the last ten weeks completely and utterly irrelevant. All of the 'strategising and scheming' Arisa was constantly going on about amounted to nothing because of one simple mistake. Epic fail. 'Oops, I've done a Topaz' is already probably in common parlance in Canada. I watched the last 15 minutes of the show with my head in my hands, and the podcast we did straight afterwards pretty much consists of me going 'oh my God' and sighing loudly.
So a few thoughts on that, and the rest of the series, whilst I have a clear head. One: the way glorious Gary  handled it was absolutely beautiful. Classy, classy behaviour. He insisted the money didn't mean anything to him and it was more about him championing gay rights and getting his face known, but it MUST have hurt underneath. I suppose the only consolation can be that he will always be thought of the rightful winner by many, and he'll get sympathy wherever he goes. Jillian, on the other hand, will be treated like crap. I don't advocate that, but the first thing I would have said if I was her would have been 'I'll give Gary the car or the voucher.' She just stood there grinning inanely, which is pretty much what she's done all season.
A word in Jillian's defence though. It wasn't Jillian's fault it happened, it was Topaz's and the producers. I also got very annoyed at the suggestion that she 'rode Emmett's coattails' through the competition. Her and Emmett were at least equally matched as players; and in fact she won one more Head of Household (HOH) competition that him. I think it was for the last seven weeks, one or the other of them won the competition. You can't deny them that and the other housemates were idiotic not to evict them sooner. I even think BB fixed it slightly so Jillian didn't win the final HOH by making the endurance challenge about strength rather than stamina as it usually is.
I also want to say what a whiny little baby Emmett turned out to be. I liked him throughout the season, even when he was playing 'tough guys' with Tom, but the way he reacted to Gary evicting him was pathetic. Gary made 100% the right move to cut him at exactly the right moment. It's just a shame it meant absolutely nothing in the end. Emmett also seemed quite ungracious about his supposed girlfriend winning; surely he should have been happy for her, at least, especially as she won it as a complete fluke, and pretty much undeservedly? Even his message to her as he put the keycard in was a dig at Gary (Gary was evicted, but voted back in by the public, so Emmett said he didn't deserve it), and not something like 'Jillian, you've won the most competitions in this game, I'm really proud of you and you deserve this.' Douche move, Emmett. I don't think this is going to be a 'showmance' that's going to survive in the real world - I'd certainly tell him where to go after that. He thought he had it sewn up: he didn't. That's life, Emmett. Think how Gary feels! At least Jillian might take you out to dinner and buy you a new cowboy hat. 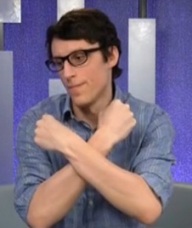 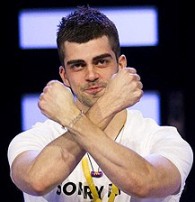 As for the rest of the jury, specifically Peter and Alex ('The Sheild', or even more embarrassingly, I saw Peter write it on Twitter as 'The Sheyld' - cringe) and their X Factor arms (see left) and neon shoes and smart-arsery: well did they get egg on their face in the end, or what? Peter, who I liked throughout the show (he has the same eating disorder as me), made a unnecessarily nasty comment to Jillian when he thought she was done for, calling her 'an awful player and an idiot': neither of which was true. She was 10 times the player he was; sitting back and playing shrewdly, unlike him. Peter made several schoolboy errors, from evicting AJ over the odious Andrew, and the worst of all, evicting Topaz (and her dressing gown of doom) when they could have teamed up and had a real run at it. The problem with Peter, and Alec, is they talked the talk but they didn't walk the walk. What about when Alec just gave up on that last veto competition? What really was his thinking behind that? The way he treated Topaz was also pathetic and childish. Both Peter and Alec went on like they were a pair of teenagers. You weren't power players, you weren't baddasses, and Peter was only elevated to a higher postition of cool by being Marsha the Moose's object of affection. Marsha (think Tree of Tempatation if you're in the UK) was a lovely twist, and a bit of comic relief, and will probably be the most memorable character of the series apart from Gary. 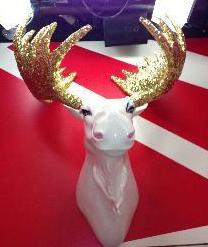 So, whilst we're on Marsha, what else did the show do well? I'd actually say, a lot. Whilst heavily borrowing from BBUS, it also used several ideas from BBUK and BBAU, such as the yes/no task, secret missions, and a more lighthearted approach than the full-on bloodshed of BBUS. There was humour and comraderie. The casting was excellent, and it was great to see all new players, not the recycled old people again and again from BBUS. I realised Canadians are really cool people, and I love the way they say the word 'out'. I did thoroughly enjoy the show, so to see it end in such a shitstorm was genuinely upsetting and disappointing as a fan. I hope the producers enjoyed their 'drama' because it really left a bad taste in a lot of people's mouths. I'm quite sure there will be hundreds, if not thousands, of people not watching again, because you think, what is the point if the rightful person isn't even going to win? What really was the point of all the comps, the social games, the fighting? 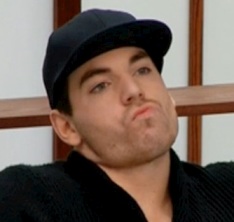 So do the right thing, BB Canada, and next year bring back Gary as host (we had a contestant in BBUK go on to become host). I'm sure he'd do a better job than Arisa, it would kind of be just desserts. Whatever happens; Gary will go onto great things, and Jillian... I don't know.But I would personally feel guilty spending someone else's rightful money.
Finally a shout out to Tom, a pound shop Marshall Mathers (right), and one of the most impressively stupid contestants of all time, who actually said on the live feed 'I don't wear condoms, condoms are for pussies' as well as calling Gary 'a faggot' before being evicted by his own alliance before we even got to jury house stage. What an almighty douche. Hats off. You're the new Jesse.
Will I be watching again, if they do even bring it back now? Of course I will! But for God's sake, get your shit together. They threw in so many 'twists' that had a major effect on the game, but they couldn't anticipate that the final twist of all could have seen them possibly digging the show's own grave. Let's hope that's not the case.
PS: Can I have Marsha now? Or even Marge the evil moose? I'm not fussy.
Posted by lightupvirginmary at 17:01

I agree that both Gary and Jillian deserved the win and I was rooting for Gary too... but we have to give Jillian credit. She manipulated Topaz so well, that she got her to only think of Jillian and "150%" rather than the rules of the game. I commend her for that and am happy to crown her champion. I love the evilness this show brings.:-)