Kenelis Live at the IndigO2 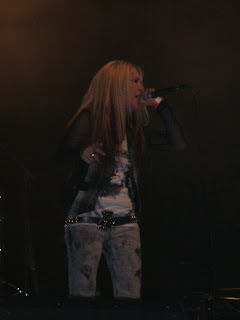 It's not often you can say you liked something before almost everyone else, and for it to be actually true, but I might just have bragging rights here. Last night I went to Glow, which saw the launch of the Kenelis single Jealous. There were some other bands playing, but Kenelis pretty much blew them away.
I have to declare a vested interest. I've known Mel Sanson, the lead singer for about ten years, and used to go and see her play when she was a singer/songwriter sat on a stool at open mic gigs, and not shouting quite so loud (although she was still angry)! Although she's a friend, I've always respected her music (you know me, I wouldn't go and see a band twice I didn't like). Tonight just seemed like where it had all been leading up to.
The Indigo venue is amazing, I was gobsmacked by it. The location is obviously dogshit as it's hard to get to the dome, and the dome itself if a soulless airport hanger filled with boring restaurants. But the Indigo2 (I don't like writing that) was actually a little jewel inside. The stage is really high so you can see everything well, and it was really fucking loud, too. The support acts ranged from Ocean Colour Scene-alikes, to a band who seemed to be fronted by Mary from accounts who'd got lost after work. But they actually all put on a pretty good show.
I've never heard Mel's band sound so tight, and her voice sound so strong (although her accent sounds more London than I remember previously!). She can really scream. Her tunes are really great, too, my favourite song by a mile was Give Her The Gun, it was just so angry. Sick was really excellent, too. Her lyrics are really honest and raw and her tunes are catchy enough to sing along to. Mel was headbanging, dancing round, playing the keyboard, playing guitar, doing the foot-on-speaker posturing and had a really good connection with the crowd. The crowd looked much more excited than they had all night.
Mel was born to be a front woman and pretty much lives life as if she's famous already. I felt really proud to see her up on such a big stage. She's be brilliant as a massive rock singer because she's a lot more interesting as a person and performer than.. well, anything you saw at The Brits this week, for example.
I know for a fact people care passionately about Kenelis because I met someone with a gigantic Kenelis tattoo on their leg! You can't really get more dedicated (or mental) than that.
If you like angry female rock voices, you'd be mad not to check out Kenelis where you can see her videos and stuff. Oh and you can buy her new single Jealous on Monday on Itunes, woo. PS. My photo's not very good, cos my camera is shit.
Posted by lightupvirginmary at 14:28

Sounds like you had a great night! I've never been to the Indigo2 but am pleasantly surprised to hear that it's a decent venue. x

I love it and I'm whoring it everywhere!!! You've always had an awesome way of writing mate and I hope I see you soon x

I like your username Mel. Glad you like it.
And I like you lilylipstick. :) Indigo is well worth checking out (if you can face the journey!)