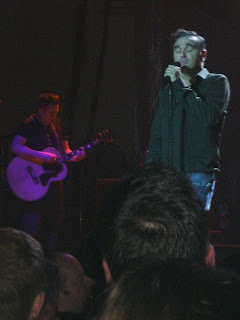 Wow, what a beautiful weekend in Yarmouth. I expected Yarmouth to be some sad, fading town dying on it's arse, but actually it was lovely, very pretty with a really great pier. I personally couldn't be happier than in a place that's quite deserted, smells constantly of fish and chips and sells every kind of tat. In fact, that's my idea of heaven.
And then throw Morrissey into the mix. Did I ever doubt Morrissey would turn up? From the second we booked the tickets. As soon as he cried off the Albert Hall, I wrote him off. Yet there he was on Friday night; I saw him with my own eyes!
Britannia Pier is a bizarre venue, advertising such wares as Jim Davidson and the Chuckle Brothers proudly at it's door. At around 2pm we walked up the pier and saw 5 or 6 very insane people already queueing (some of whom I recognised; ah, the Morrissey community, we're so close- ahem). My boyfriend and I began queueing at 6.30 (doors opened at 7pm) and despite at least a hundred people in front of us, we got incredibly lucky for seating, about four rows back and right next to the middle aisle, which gave us a fantastic view (my photos were SHIT though, as you can see!). The seats were tiny and people were complaining about the leg room, but I didn't really mind. As we sat there, neither of us could really believe that Morrissey was actually going to turn up, on that stage, right by that person selling popcorn. It just seemed impossible.
Now for the really weird part: the support band, Doll and the Kicks, were actually GOOD! I know; I was stunned. They had a really strong front-woman who looked studenty and petite but she had a big old voice on her, quite Karen O-esque. Very impressed indeed.
Next there was a bizarre animated video with giant Morrissey heads on and a song that appeared to be called 'lighten up Morrissey', which was quite amusing. However, after that Morrissey was still hawking that same fucking intro video from what feels like two decades ago with the bloody New York Dolls clips on. He must be sick of it by now, surely? And I'm going to have to watch it another twice more, the bastard! I swear he's just trying to annoy the crowd so we are more happy to see him when he comes out.
And then... he was there, on this giant backdrop of a muscly man. I had never seen Morrissey with my boyfriend before, and I can honestly say, I've never seen either of us look so happy. The excitement for the first 20 minitues or so was just so intense, I was screaming my head off, and I lost my voice afterwards. We just couldn't wipe the smiles off our faces. Morrissey looked great; very smart in a dark blue blazer. He was in fine form, opening with This Charming Man, followed by Irish Blood, English Heart. I won't ruin the setlist TOO much in case my best mate reads this; we're going to see him shortly, so it's nice to have a bit of a surprise. Personally, I've been ducking and diving the setlist for months now. The set was quite Smiths-heavy I thought; I preferred hearing stuff off the new album, just because I'd never heard it before and it sounded damn good live. I really enjoyed Sorry Doesn't Help; which is weird, as I don't even particularly like that one on the album. The setlist was also quite Quarry-heavy; which is good, and he played NOTHING off Ringleaders; telling! We were treated to Seasick from Your Arsenal, and Why Don't You Find Out For Yourself from Vauxhall. Some Girls are Bigger than Others is probably the worst song off the Queen is Dead, but actually it was quite lovely live. The set lowpoint had to be The Loop; does anyone care? But I was very relieved that he appeared to have stopped hawking the new and un-improved Southpaw, and we heard not a peep of Best Friend on the Payroll OR Reader Meet Author; good! I don't think he played a thing off Malajusted either; I wouldn't have said no to Trouble Loves Me.
I think on the whole, considering he didn't even play my two favourite songs off Refusal, the setlist was excellent. It was just such an enjoyable gig, we could see so well. Seating venues do suck, but it's nice to have that little space of your own too, and to be able to see without being crushed.
Morrissey seemed in a good mood too, saying 'Is this the Royal Albert Hall? No.' and making references to 'outpatients' and changing the lyrics of Squeezing My Skull to 'it's a miracle I made it to Great Yarmouth'. I also enjoyed his joke about you being able to find 'Skull' if you had a large spade (although it's your fault Moz, you could have given us some b-sides, couldn't you?)
He was also passing the mic to the crowd, and just seemed in good spirits. A few stage invaders tried their luck, and there looked to be a brawl kicking off at the front at one point, but all in all the atmosphere was amazing. The show seemed so short; with just one encore, and he was gone. It left us on such a high; it just couldn't have been much better.
Just don't mentioned what happened to me in the 80s bar afterwards. Personally, I blame Rick Astley.
Next: Troxy, and Brixton. I'll be the one with the massive grin!
Posted by lightupvirginmary at 20:00

Email ThisBlogThis!Share to TwitterShare to FacebookShare to Pinterest
Labels: britannia pier, doll and the kicks, live, Live at the Britannia Pier, Morrissey, Yarmouth

You're wrong about Some girls are bigger than others, you know. I'll try to change your mind :)

And I'm intrigued as to what this intro video is because I've never seen it on any of his tours. Oh and that song 'Lighten Up Morrissey' is by Sparks.

Oh my gosh. Great Yarmouth as in the seaside town in Norfolk?
Damnit! I never knew about this- I'm very jealous.
Sounds like a great gig though :)